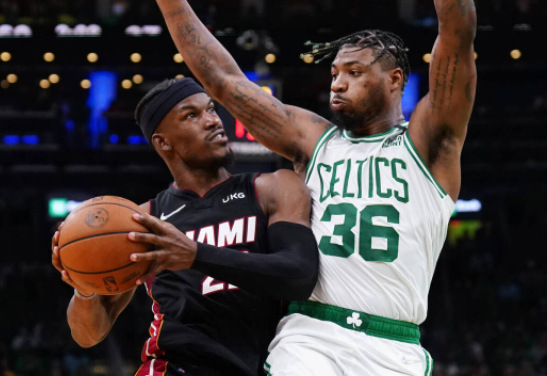 Miami Heat coach Erik Spoelstra has faith that his team can bounce back in Game 5 following a 102-82 loss to the Boston Celtics on Monday, where the Celtics evened the series.

“…We’ve proven that we can do it. The margin for error for either team -- whatever they have done to us, we can do to them. None of us are happy about what happened tonight.

"This is part of the playoffs. There are these extreme highs and lows, particularly when you have two teams that are pretty closely, evenly matched. But we've proven that we can find solutions offensively in a lot of different ways."

Boston’s Jayson Tatum led the team’s win with 31 points, riding on a high determination following the team’s loss in Game 3 in which he felt like he let his teammates down.

“Obviously, we knew how important this game was,” said Tatum. “Everybody just had to come up with a different sense of urgency.”

Seeing how the Heat have been dealt their fair share of injuries while still managing to attain the best record in the Eastern Conference, Spoelstra and his team certainly have reason to feel optimistic despite their Game 4 blow.

Heat guard Tyler Herro was unable to participate in Monday’s game due to a groin strain that occurred late in Game 3. Currently, his status for this upcoming Game 5 is uncertain.

Additionally, Jimmy Butler has been experiencing knee soreness but claims he isn’t "too worried" about the injury.

P.J. tucker, also dealing with knee soreness, and Kyle Lowry, who is suffering a hamstring strain, have also had to manage ongoing issues - however Miami is choosing not to play victim while plagued by injuries.

"Injuries is a part of this," said Heat center Bam Adebayo.

"It's a part of playoffs. You learn to adapt. We're one of those teams, we've had so many injuries throughout the season that you know we've learned how to win. Guys being out, guys playing half, guys playing 20 minutes in the game, just depends."

Teammate Butler shared a similar outlook regarding his knee problem, and puts the blame solely on his performance.

"I'm straight," he said. "No excuse for how I played tonight. It don't got nothing to do with my knee. I've just got to be better. I will be better. I'm not too worried about it."

For the 32-year old forward, keeping the game “extremely simple” is what tends to help the Heat play well.

“When anybody tries to hit a home run and do it by themselves, we kind of get in trouble. Ball sticks. We turn the ball over. We take a bad shot. We just need to do everything together like we've been doing all year long”, said Butler.

"It will be on myself, on Kyle, on Bam to make sure that we make that happen."

Wednesday’s Game 5 will see the confident Heat face the Celtics once again, where these offensive solutions must be executed if they’ve learned anything from Game 4.