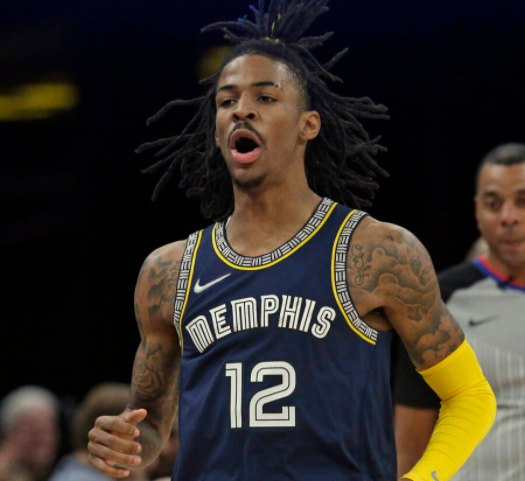 With a previous career-high of 47, Morant’s performance marked the first 50-point game in Grizzlies franchise history.

Ja Morant of the Memphis Grizzlies scored a franchise-high 52 points in Monday’s 118-105 victory game against the San Antonio Spurs - breaking the 46-point record he had previously set just two days ago vs. the Chicago Bulls.

Morant landed an impressive 22 of 30 field goal attempts, setting another record for the team.

"He's at the rim every night, but the way he put it together tonight, he was just in attack mode from the jump,'' said Grizzlies guard De’Anthony Melton.

"He got whatever he wanted, and it looked easy out there. It was just special to be out there and watch that.’'

When we think about Monday’s game, two particularly memorable plays from Morant stand out.

Who can forget when he landed an awe-inspiring dunk over the Spurs' Jakob Poeltl (who stands at seven-feet), followed by that fadeaway jump shot during the stroke of half-time after snagging a pass the length of the court from Steven Adams mid-air.

Morant commented that the shot was "something I'll probably never be able to do again.'' However, he also added that if Adams is the quarterback from that kind of a throw, there's a bit of wide receiver in his own ability.

The 22-year-old point guard even hit a 3-pointer from near the logo with the dwindling shot clock.

When asked about the most memorable move from the night, Morant replied that “it's got to be the 50.”

"I'm thankful for my teammates, my coaches. They believe in me and have all the confidence in the world that I'll make the right plays,” a grateful Morant shared.

"So, you combine that cerebral part of his game with his athleticism and you've got a special kid."

The Grizzlies play again on Thursday vs. the Boston Celtics, with the Spurs facing the Sacramento Kings.