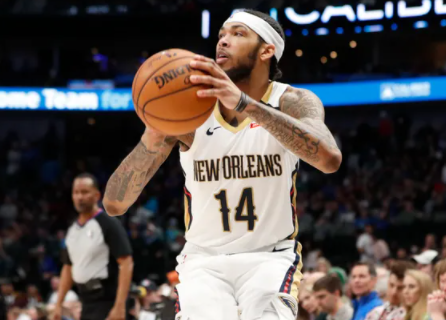 The win carried New Orleans a half-game ahead of the Lakers for the ninth seed.

Following a 10-game absence due to a strained hamstring, New Orleans Pelicans top scorer Brandon Ingram was finally healed enough to return to the game on Sunday - resulting in a triumphant 116-108 win over the Los Angeles Lakers.

The matchup saw Ingram score a generous 26 points for the Pelicans; impressive for having just returned from quite a hiatus.

“Ive been out for three weeks, and to be back and win in this fashion with all my brothers, it’s special,” said Ingram.

"It shows we believe in each other. ... When winning is the mentality good things come to you and great things came to us tonight.”

Los Angeles’ LeBron James had seven 3-pointers and even finished with a whopping 39 points, but hit only two of eight shots during the fourth quarter for four points, missing on three occasions from deep after hitting seven of his first 10 from the 3-point distance.

James scored the majority of his points after suffering a left ankle twist early on in the second quarter, when he landed on New Orleans center Jaxson Hayes’ foot.

Despite this, the four-time MVP chose to tough it out and play in pain.v“I have no idea how I finished the game," said James. "Its pretty sore right now.

“I didn’t want to come out," James continued. “I understood how big of a game it was for us. ... I just lost all explosiveness, so a lot of my game tonight was played on the perimeter after that. ... I couldn’t really get into the lane like I would have loved to.”

Murphy, who was drafted 17th overall, scored all of his 21 points during the game’s second half - with Jones, who was a second-round draft choice, finished with 16 points and a career-topping six steals.

“It shows they’re getting better," said Ingram of the young players. "It's showing up on the box score. It’s showing up in wins. It’s definitely helping their confidence out a lot.”

Also assisting James for the Lakers were Malik Monk who finished with 23 points, Russell Westbrook who scored 18 and Dwight Howard who had 10 rebounds.

“We can score when we want if we continue to play the right way, which I didn’t think we did in the second half,” admitted Westbrook.

The Pelicans go on to face the Portland Trail Blazers on Wednesday, with the Lakers facing the Dallas Mavericks tomorrow (Tuesday).