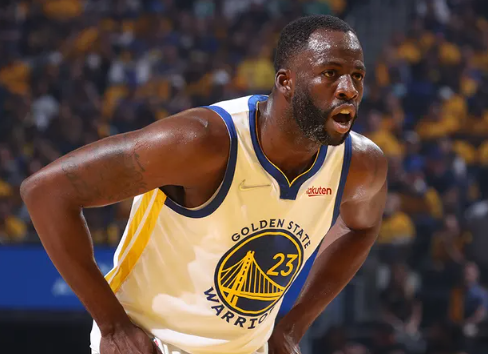 "If I'm not sending a message, who is sending that message?” said Green.

After claiming that the Boston Celtics needed to “feel” him more, the Golden State Warriors’ Draymond Green was set on establishing a defensive tone for Sunday’s Game 2 at the Chase Center - a game that resulted in a series-evening 107-88 victory for the team.

Talking a whole lot of trash, arguing with officials and harassing Celtics ball handlers, Green admitted that it was “definitely an attitude adjustment” for Boston. His intentionally annoying behaviour paid off as he earned a technical foul midway through the game’s first quarter.

When teammate Stephen Curry (who scored 29 points on Sunday) was asked about the moment he knew Golden State would be getting this amped up version of Green for Game 2, Curry responded with, "About five minutes after Game 1."

“You feel him in his presence, and the other team feels his presence and intensity, and that's contagious for all of us.”

Green was so heavily involved in the contest that it wasn’t a stretch to assume he’d be kicked out of it. He never backed down from what he intended to do.

During one particular entanglement with Jaylen Brown that caused the referees to investigate further, the verdict remained in Green’s favour - and even if with the risk it may not, the determined Warrior displayed no concern.

"For me to sit back and say, 'Oh, I'm going to push it to this edge and try to pull back,' that don't work," said Green. "I've got to be me. So the first tech -- it is what it is. That's not going to stop me from being aggressive or doing what I do on the basketball court. Just got to live with the results."

It’s hard to forget the first quarter moment Green snagged the ball from Al Horford on a drive to the lane that was so aggressive it appeared to completely shatter the Celtic player’s spirit.

But regarding his own psyche and that of his teammates, Horford claimed that Green made “no impact.”

“I mean, he's going to do what he does. We're not worried about him,” said Horford.

Green also provided his view. ”I think everybody played with more force," he said. "It wasn't just me. It was across the board. If I just pick up my force and no one else does, it doesn't work."

As the teams head into Game 3 on Wednesday, Green has no plans of putting his “attitude adjustment” to rest.

"I have to continue to do that in this series. It's only going to get tougher. I have to take it up another couple notches."